After 3 months of no RVing, following the death of a 92 year old family member, we decided to take the motorhome to Oklahoma for the burial service. The motorhome was driven once since May on a brief "exercise run." We called and reserved a site at Highpoint RV Park in Enid about an hour from the rural cemetery where the burial would take place. One family member joined us there in a small travel trailer. The drive North from our home base in Texas took about 7 hours. At our Subway lunch stop we discovered the "umbilical" cable between the RV and towed car had been pulled loose from the RV and dragged on the highway. It was shredded, so we pulled out an old one we have carried for many years "just in case." It still worked, providing tail and brake lights on the towed car for the rest of the journey. It turned out to the be hottest day of the year. RV air conditioners do not do well trying to cool the large box, especially on hot days. When we arrived in Enid at 6pm, the temperature INSIDE the RV was 94! Other family members stayed at motels in Enid. We had two evening gatherings in a large social area of the motel, complete with take-out food and masks. Two members of the group work in hospitals, one with very strict COVID procedures, and those procedures were pretty much enforced for the group although we did not take temperatures at the door. We checked with a number of locations looking for a new umbilical cord, but were unable to find one in Enid ... it pays to have a spare of some things! The burial services went well with perhaps 30 people in attendance, virtually all related in some way. On the return trip we re-fueled at a new Love's on the way out of Enid, with breakfast sandwiches from the Carl's Jr's on the premises. We took on just under 70 gallon of diesel at $2.30/gallon. The temperatures were much more pleasant as we headed south. After a stop for lunch at a Subway located in a Love's travel center near Ardmore, and another 64 gallon of diesel at $2.10/gallon, we arrived back at home base about 4pm. Our cost for two nights at Highpoint RV Park in a premium pull-through site was $61 per night with military discount. 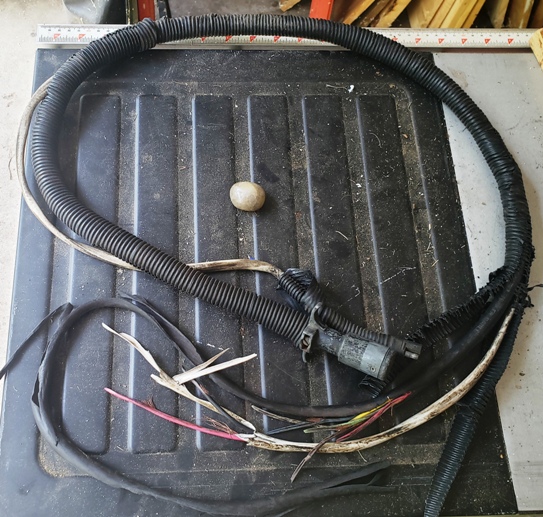 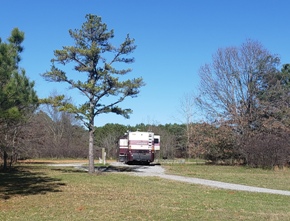 An RV can be a great tool for social distancing!  Just after many states started to re-open from the COVID-19 lock-downs, our granddaughter was scheduled to graduate from high school in Alabama. Although she had been out of school for almost 2 months at this point, we decided to go through with our previously planned trip to her graduation. The plan was to have a private family party to help her celebrate. Then, about a week before the event the school decided to have a modified graduation ceremony in the open-air football stadium with very limited family member attendance. We have rural property there with RV hookups, so were quite isolated in our living arrangements! Using a credit card a the fuel pump helps to maintain distancing, the only required contact with other humans being one take-out lunch along the way and one RV site rental. We enjoyed the week with family, breaking the isolation only for a trip to Walmart for supplies. On the way to Alabama we did an easy two days, staying overnight at Bonita Lakes RV Park in Meridian MS for $25 per night with Escapees RV Club discount. On the return trip to Texas, we got an early start and drove straight through, a bit over 600 miles. To cap off a great trip, we refueled 7 miles from home base paying only $1.86 a gallon for 50 gallon of diesel!

With the extended lockdown for Covid-19 I eventually ran out of RV repair projects and moved on to "Honey-do list" items in the "stick house."  One involved the dishwasher, which sometimes refused to wake up and work. At first I thought the breaker for that circuit was bad and flipping it would sometimes cause the dishwasher to work. But the breaker checked out as good. After more checking I found that flipping the breaker off for more than 30 seconds would cause the dishwasher to work. Some internet research told me the problem was most likely the circuit board or the door latch. So I ordered a circuit board for apx $75. The install was relatively easy except for having to lie face down on the floor to work under the front, and so far it is working fine. Another project that was more fun involved the mailbox out at the street. 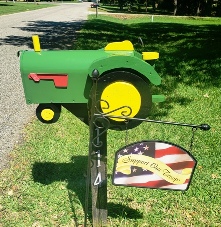 When we bought the house, it had a mailbox painted and trimmed out to look like a red farm tractor. The previous resident was a red tractor fan who owned a couple of restored tractors, and one that needed restoration. I had done some pretty extensive repairs and repainting on the red tractor mailbox a few years ago. It was needing some minor repair again. We don't own any red tractors, and very recently bought a John Deere lawn mower, so I decided that the repair would include a change in colors.  I would like to see the red tractor collector's reaction if he happens to drive by and see his red tractor is now John Deere green and yellow!!
at May 17, 2020 No comments:

RVing is an adventure … even when you aren't RVing!!  Our diesel pusher has 5 large 12v batteries on board … 2 chassis batteries supporting the "truck" side, and 3 house batteries supporting the "house" side.
During our annual chassis service in March, the shop advised us that the chassis batteries went dead on them a couple of times and when tested, they failed the load test. While they were at it they also tested the house batteries and advised that one of them failed the load test.  These batteries were all 6 to 7 years old … pretty good service.
I decided while in COVID-19 lockdown that I would replace the chassis batteries, Group 31HD bateries, and do the house batteries in another month or so. Alas, the best laid plans …
While installing the new chassis batteries I was hearing a strange noise. Then I touched the nearest house battery and found if very hot to the touch … not good. Then I realized the hissing sound I was hearing was the battery boiling … while not hooked up to external power, charger, etc. REALLY not good!  I tripped the battery disconnect switch and the boiling continued, so I disconnected the negative cable on the closes battery to shut all three batteries down.
So, after finishing installation of the two new chassis batteries I went in search of three new house batteries … Group 29 deep discharge batteries. I found them at a local auto parts store at a good price, and got them installed.
The motorhome is now happy with 5 new batteries in place, but my vision of spreading the cost over a couple of months didn't work out.  We did more than our part to boost the local economy on the day that Texas "re-opened" for business … apx $150 for groceries, and just under $600.00 for batteries.  Yikes!  RVing is great, but we haven't been anywhere since early March!!  Even so, we have learned that these beasts cost money just sitting still!!  At least we will be ready to roll when we can finally get back on the road!!
at May 02, 2020 1 comment:

Moving on to new advenures!

After 13 years of sharing our pets, military life, my grandfather's 1967 F-100, a 1988 ASC McLaren Mustang, and our extensive RV travels on a website, the second host I had used suddenly increased the fees exponentially. That caused me to reconsider the website, and the many areas of it that I had not paid much attention to in recent years. So, I pulled the plug … Oct 1997-April 2020 … R.I.P. Time to move on to another medium.

I don't know if I will be able to share some of that history here, but I will figure that out ... yea or nay ... as I learn more about blogger.com. I have plenty of time for learning new tricks right now as we enter the second month of the COVID-19 lockdown!


We have completed a number of repairs, and are looking forward to getting back on the road in our RV. While we wait … and learn about blogger.com … here are a few links for you to explore to learn about a great RV club for military veterans … active, Reserve, honorably discharged, retired, etc. We hope to see you on the road soon!!

After 3 months of no RVing, following the death of a 92 year old family member, we decided to take the motorhome to Oklahoma for the burial...